I got this image from the slides below. I’m surprise to see that:

* Japan loves Apple. I mean they’re known to be so advanced regarding mobile devices with their DOCOMO. But it seems they’re ditching their own for Apple.

* Nokia is still number 2, and I think Android and Blackberry have still a lot of catching up to do. And, looking at it, it seems, it’ll be really stupid for them to make Windows their flagship mobile OS.

* Blackberry – If the infograph is true, it confirms that they’re really in trouble. But probably only to the individual consumer. They’re probably still strong with the enterprise — companies who wants to keep track of their employees. =)

* You might be more profitable making symbian apps over Android. I guess Android does well with creating hardware using it, than creating software for it. Or, create hardware and software and sell them as one. 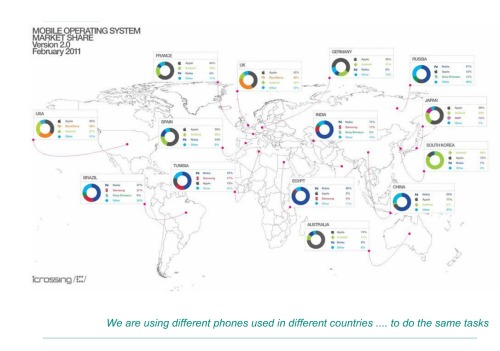 m-learning across the world
View more presentations from TribalSlides

Filed under Side Comments